The Tower is the optional level of the Catacombs.

You can access it by unlocking the door at the second level of the Catacombs with a Treasure Key. In this level, you can gather one of the four Rune Orbs (this one provides 2 SPD) in the game. Like in the Forest Temple, there is no spellbook in the Tower.

The Serpent is the boss of the Catacombs branch level: The Tower 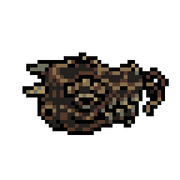 The Serpent will sit in a pool of water under a bridge at the bottom of the Tower. Once a player grabs the Rune Orb, the bridges open and the Serpent starts to try and kill the player while the water rises at the same time. There are gates at certain heights of the tower that will open once the Serpent gets damaged to a certain health threshold. The last gate opens when the Serpent is killed.

Despite its limited move set, The Serpent is a very capable, and deadly boss. The high speed can make it difficult to land a hit. But it is recommended to not attack until you have reached the top of the Tower. AT the top the Serpent is quite easy to hit. Be aware of the rising water after you grab the Rune Orb as being caught in the water can be extremely dangerous due to the amount of Fishmen and Imps. Once at the top of the tower, aim for the head with either Spells, Ranged attacks, or Melee attacks. A Battle Axe works well here as well as Bows.

A mage can aim to max out their lightning resistance, so they can use Eleclance on the Serpent without getting hurt themself, which effectively results in the Serpent dying in mere seconds.

These wooden platforms begin to shake as soon as a player lands on them. After a second, the platform deactivates, sending any creature on it plummeting down.

Falling off the level results in instant death.

Death Protection gear will bring you back to solid ground after you have died. This is not always foolproof.

Unlimited Jumps gear will make it easy for you to jump back to safety.

Some other methods can help you climb back up, assuming you have good timing, good reflexes, and the right things equipped:

Featherfall will give you some extra seconds to live, granting a bigger time window for the above options. It can also give you enough time to open your inventory and grab gear you had not equipped. Don't be afraid to pause the game to locate the right item.

This also opens other possibilities:

Swoopers forced to fall off the level (through the use of Frost Nova, for example) will fly back up.

Community content is available under CC BY-NC-SA 3.0 unless otherwise noted.