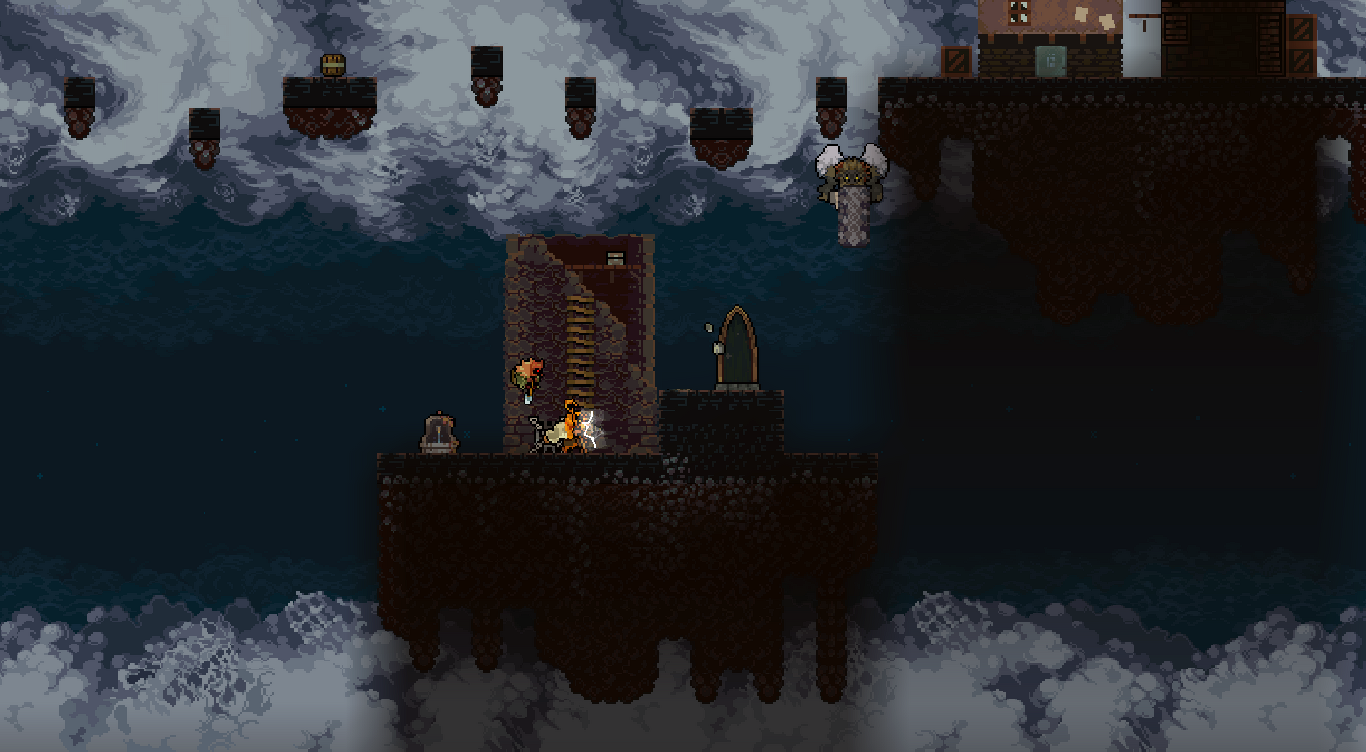 The Rift is the fourth Area of the game.

Its levels are composed of several small islands, each hosting anything from a shop to an exit or merely some enemies. These islands are often far away from each other, and sometimes the only way to explore the level will be to use the teleporters scattered throughout the islands that send you to various locations in the level.

The level is also bottomless, causing instant death to any who may fall all the way to the bottom of the level.

The Behemoth is one of the three bosses you will encounter in the last area of the game.

The Behemoth is composed of three body parts: one head and two hands. The Behemoth will attack with both of its hands until they are both destroyed. When they are, the Behemoth will lower itself, giving you an opportunity to attack its head before rising up again. Damaging his hands will not damage him.

High mobility is of the essence in this fight. The Behemoth's attacks are few but pack a punch and can be difficult to avoid.

Having double jump, high jump or even triple jump can make jumping over the shockwaves of the ground pound an easy task as well as allow you to jump up to the Behemoths head to start attacking it early. Using homing spells or a bow you can damage his head while he still is in the air

Speed is also desirable as it makes it easier to get out of the way of the Hand charges.

The Behemoths head is also fairly tanky, so be prepared for a long fight.

The Black Knight is one of the three bosses found in the last area of the game.

Strategy A lot of new players are caught off guard by the sheer attack speed of this boss. The boss itself isn't super difficult, but the high speed makes it difficult to find openings.

Another reason that this boss is difficult is that very few Weapons can easily defeat this boss...That said, you can still help yourself against this boss with a decent bow and some double jump boots, and a good weapon always helps!

This fight requires a lot of mobility, so if you have a lower than average(less than 3) speed stat, you may have a hard time.

The Black Knight also has a trick up his sleeve that you should look out for:

The Brood Demon is one of the three bosses found in the last area of the game.

The brood demon sits idle and not moving until a player approaches. After the boss sees the player, the Brood Demon will fly up and start to attack the player.

Strategy Go to an area with no other enemies before fighting this boss in order to get the space necessary to avoid bombs.

Destroy the eggs to prevent broodlings from spawning.

Brood Demon can be frozen to reset its attack cycle.

Falling off the level results in instant death.

Death Protection gear will bring you back to solid ground after you have died. This is not always foolproof.

Unlimited Jumps gear will make it easy for you to jump back to safety.

Some other methods can help you climb back up, assuming you have good timing, good reflexes, and the right things equipped:

Featherfall will give you some extra seconds to live, granting a bigger time window for the above options. It can also give you enough time to open your inventory and grab gear you had not equipped. Don't be afraid to pause the game to locate the right item.

This also opens other possibilities:

Swoopers forced to fall off the level (through the use of Frost Nova, for example) will fly back up.