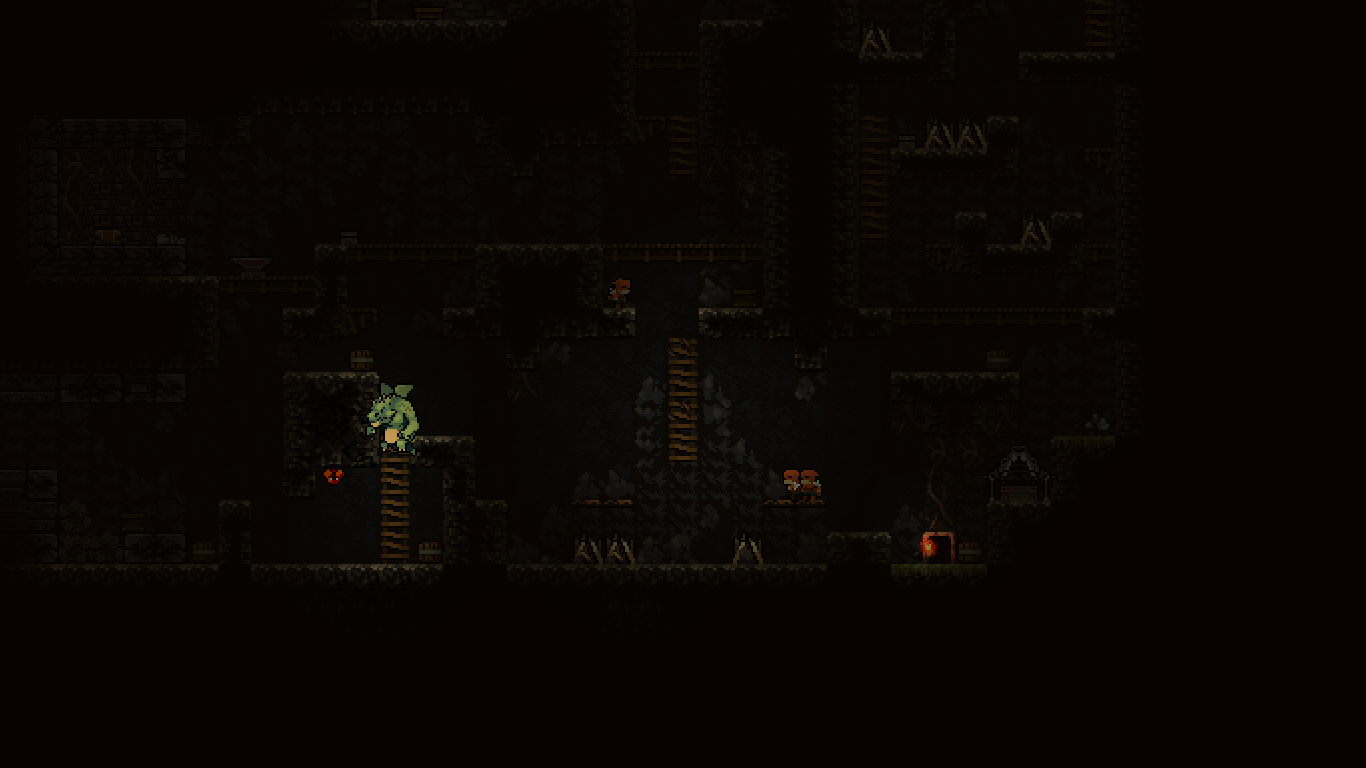 The Dark Caves is the first Area of the game.

Although the enemies present in this area are generally easily disposed of, the level contains many traps (such as boulders or spikes) than can kill the player instantly. Consequently using a scroll of magic mapping can be useful to know what parts of the area are especially dangerous, but players will still have to pay attention to their surroundings if they want to survive. Wearing boulder and spike protection gear is also strongly recommended if it is available.

The Baby Dragon is one of the three bosses to spawn in the Dark Caves.

Initially sleeping, it will wake up when the player gets close to it. At times, its capability of flying might make the fight harder for melee characters.

Try standing behind an obstacle when the Dragon is spitting fire and getting close to hit it just after it spits the third fireball, but be wary that they can start spitting fire again immediately. Fighting it on small map spaces is probably best as that gives you obstacles to hide behind and you can quickly get close to the dragon to attack it.

The dragon's fireballs cannot hurt you while underwater, so you can attack it without consequences. Be aware that the more fire the dragon shoots, the more the water decreases. (Fireballs from Divebombers can still hit you underwater.)

The fireballs do not deal damage when the Hero has +4 fire resistance, rendering the Dragon effectively harmless.

Also if you have a chance, try running/swimming or fight it inside the water.. making it an easy kill

The Goblin King is one of the three bosses to spawn in the Dark Caves.
It has 65 HP.

Will summon goblins as soon as it takes aggro on the player.

It is recommended to fight this boss somewhere where you have a lot of horizontal mobility.

Also before you do anything, take out the 2 goblins before fighting the boss as they can mess up the fight for you which is bad because this boss does a lot of damage.

The Goblin King's charge attack is potentially his most dangerous attack, as that does a whopping 15 damage which is a lot for this early in the game. You can tell if he's about to do it if he raises his axe which makes a sound. You can avoid it by timing a jump, or jumping to a higher platform or behind him if you're not used to the timing between the axe raise and the charge. The downtime coming from this attack is a very good time to strike.

The Goblin King's grab attack is easily the most dangerous if there are any spikes near, as you could get thrown into spikes which is instant death without any spike protection gear. If the Goblin King withdraws his axe, he's about to do the grab attack. You can avoid it by timing a jump, or jumping to a higher platform. Jumping behind him works but if he's facing a nearby wall then run away before he bounces off the wall into you. The downtime coming from this attack is a good moment to attack the boss. Note that you can't free yourself by using frost nova if you're grabbed. If you're playing multiplayer, then you can free someone else who's being grabbed by using frost nova, and the player being grabbed will get stunned for a moment after he/she gets freed.

If the Goblin King lowers his axe slightly, then he does the jump attack. I'd recommend staying away from the boss during this as attacking while the boss is doing this will almost guarantee you taking damage which is not good in this game. The downtime is less compared to other attacks, so if you choose to attack during this downtime, then be aware of the Goblin's next move.

Patience is key during this fight, as the Goblin King's attacks do lots of damage but they have lots of downtime between them which is the only time when you should strike, and the goblins can be annoying as well if you decide not to kill them beforehand. If this boss spawns in a pit of spikes, then wait until his wall bounces or jumps destroys all of the spikes before facing the Goblin King.

The best bet is to wait until the Worm stops spitting poison, as it will stand still for a few seconds before burrowing again. If you freeze the worms head using the frost nova or iceball spell he will stop spitting poison until the next time he resurfaces. The worm takes increased damage to its head and reduced damage to its body. It can only move so far into open space from any wall, floor, or other environments. Therefore, if the player is distanced far enough from an open space before the worm is close enough to begin firing its poison, the worm will recede and move back into the surface area to come from another angle. If the player has such an environment, it can avoid the prompting the poison attacks altogether by getting far enough away that the worm is forced to recede, attacking its body as it leaves, and repeating until it dies.

The Rainbow Slime is the boss of the Slime Cave.

It will chase a player similar to a regular green slime however it is much faster.

Its attacks animations are very similar to a green slime, except it will turn into a spiky ball much more often. Unlike green slimes, they can hurt you by from below if they jump up at you.

Rainbow slimes only take one point of damage from spike traps.

The Goblin King destroys spikes as if he wore Spike Protection gear. Other bosses except for the Rainbow Slime are entirely immune. Fox Thieves are also immune.

Found in The Caves and The Forest. When an object moves within an Arrow Traps range (about six blocks right or left of the trap), it launches a single arrow and deactivates. The arrow is not affected by gravity, deals about 12 damage and applies significant knockback.

It is possible to trigger an arrow trap using nearly any physical entity in the game, including creatures, dropped items, boulders, projectiles, coins, props, etc. Blood, wooden splinters and other cosmetic effects do not count.

Reflects Projectiles gear can protect the player from arrow traps.

Found in The Caves and The Forest. This trap consists of a grey pressure plate on the ground and a hidden boulder on the ceiling straight above, held by green vines. Touching the pressure plate drops the boulder. A falling boulder deals instant death to any creature underneath, with some exceptions.

Boulders can be pushed off ledges to crush other creatures, or used as platforms. In some rooms, this occasionally necessary to reach a chest.

Pressure plates can be triggered by creatures, dropped items and props, but not coins or projectiles.

With good reflexes, the player can jump before being hit by the falling boulder. Instead of instant death, the boulder will deal about 33 damage and break.

Boulder Protection gear can protect the player from falling boulders, causing them to only deal 1 damage.

Light Feet gear lets the player walk across pressure plates without triggering them.

Bosses only take 20 damage from falling boulders. A golem will take about 20 damage and break the boulder.